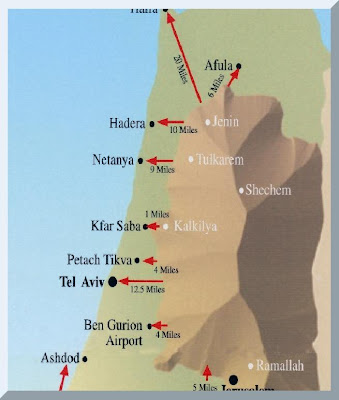 Highlands  -  whoever controls the Shomron mountain range also controls the low-lying regions on each side below. This means the heavily populated Gush Dan, Sharon and Carmel Coast regions along the coastal plain to the west and the strategic Jordan Valley to the east would both be at the mercy of any foreign power that would hold the Shomron. The strategic value of the Shomron mountain range - the spine of which runs north-south for seventy kilometers and which overlooks to the west the majority of Israel's populated areas - is immense. One only needs to visit any of the Shomron settlements or outposts, look towards the sea and the strategic advantage of these highlands will become immediately obvious. The following images illustrate the threat posed to the millions of Israelis living below as well as to industry, infrastructure, military installations and Ben Gurion Int'l Airport if Israel would cede control of the Shomron to any hostile power. 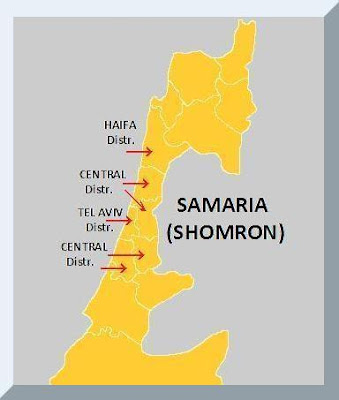 Territorial Depth  -  The pre-'67 borders (actually not a recognized border at all but merely the 1949 cease-fire line) that defined Israel for the first 19 years of its existence - the "Auschwitz" borders as Abba Eban once put it - are simply indefensible. The coastal strip, shown at right, is home to almost three-quarters of Israel's Jewish population and most of her infrastructural and industrial base. Just 15 kilometers wide at its narrowest point, the pre-'67 lines (without the Shomron) represent an existential threat to the Jewish State. While a narrow waist may look good on a woman, it looks terrible on the map of a country as surrounded, threatened and embattled as Israel. The Shomron adds vital strategic depth to the country's outline and serves as a buffer zone for the crowded coastal strip to its west and for the Jerusalem area to its south.

The Shomron is a lot closer to Central Israel than many people realize. This picture was shot
through a telephoto lens from the Samarian settlement of Peduel, which is not included in any
"settlement bloc", 25 kilometers east of Tel Aviv: 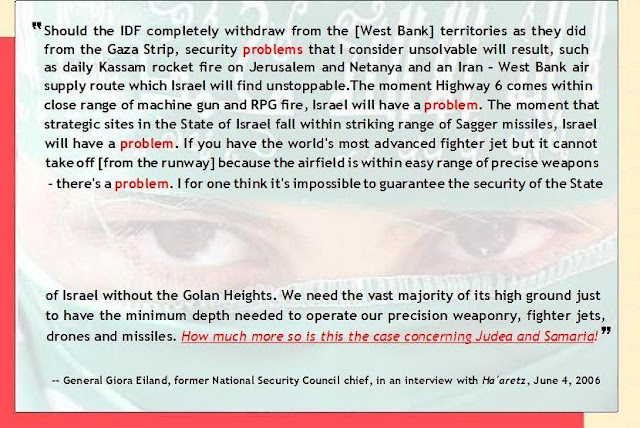 Mountain Ridge Shield - The Samarian Mountain ridge runs approximately parallel with Israel's coastal strip, home to about three-quarters of the country's population, industrial capacity, financial institutions, key fuel depots and transportation arteries. Rising to heights of nearly 900 meters, the western ridge forms a natural land barrier protecting the coastal plain from threats emanating from the east. Moreover, the ridge provides vital protection for Israel in case of a wartime mobilization. History has shown that the transition from Mideast peace to war is abrupt and unpredictable. Three-quarters of the Israel Defense Forces are reservists who need quick, unfettered access to the roadways in case of a call-up. Materiel must also be moved quickly from various points throughout the country to the various fronts. It is estimated that the IDF requires 50 hours to effectively mobilize.
Were Israel forced to demilitarize Samaria, she would be left with no strategic depth and a mere 5-10 hours of early warning time, way too little to mobilize the reservists, leaving Israel's "Soft Underbelly" vulnerable to an enemy invasion. Even with Israeli control of the strategic Samarian mountains, a sudden and unexpected Arab military offensive, especially on several fronts simultaneously, would be frightfully taxing on the IDF's ability to mobilize. Thus, only Israeli control of the mountain ridges would allow for a successful reserve call-up and for halting an enemy surprise attack. Any hostile power with such control could disrupt and delay a mobilization with disastrous consequences for Israel.

The eastern mountain ridge is no less important. It overlooks the Jordan Valley depression, which rises to an elevation of over 1200 meters and provides Israel with a virtually impenetrable tank barrier. From the eastern Shomron Mountain ridges, even a small Israeli force can neutralize a large enemy ground invasion, giving the reservists the valuable time needed to arrive. This is an advantage not to be underestimated. Although two-state solution advocates will claim that topography is no longer relevant in today's age of ultra-sophisticated modern weaponry, in fact the very opposite is true. Hi-tech weapons systems used against Israel would require her to react and mobilize all the more quicker, leaving her with almost no margin for error (for the full story, read Samaria's Strategic Value). Technology is not infallible. Samaria's strategic height and depth would likely enable Israel to overcome any technological, intelligence or operational failure that may arise on the battlefield. Moreover, Israel's sophisticated high-tech weapon systems of today will soon enough become low-tech tomorrow. Don't let the left-wing spinmeisters fool you - high ground still trumps hi-tech. Missiles can destroy but only tanks and ground troops conquer. Without the Shomron Mountain ridge shield, Israel's very existence could be threatened. 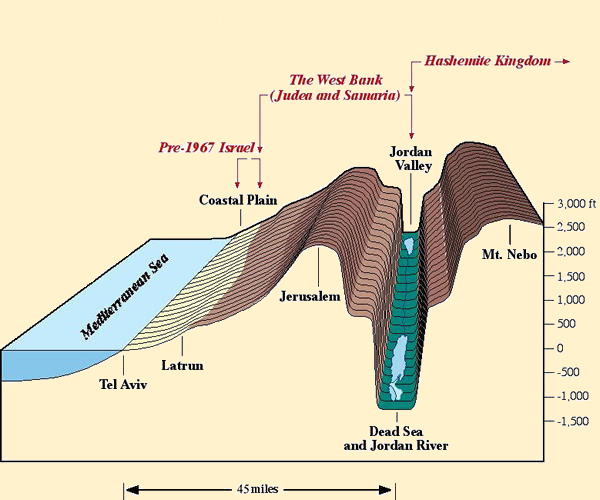 "It is unthinkable that Israel would return to the '67 borders in the West Bank, which would deny the Israeli people the defensible borders that are vital for them. Even in the era of advanced military technology there is a decisive importance to strategic depth and terrain conditions for national security." -- Lt. Gen. Earl B. Hailston, Commander U.S. Marines in Iraq/Afghanistan.

“Missiles fly over any terrain feature, but they don't negate the strategic significance of territorial depth. The key threat to Israel will remain the invasion and occupation by armored forces. Military success requires more than a few hundred missiles. To defeat Israel would require the Arabs to deploy armor, infantry and artillery into Israel and destroy the IDF on the ground. That was true in 1948, 1967 and 1973, and it remains true in the era of modern missiles.” -- General (ret.) Al Gray, former Commandant, US Marine Corps

"Israel should not withdraw from Judea and Samaria, lest it fail to provide security to its People. It is impossible to demilitarize Judea and Samaria effectively" -- 100 retired Generals and Admirals (Oct. 1988, Washington Times)

"As a soldier I would tell you that the pre-'67 borders are not defensible in the long run for Israel. They absolutely cannot live with those borders with those distances" -- Gen. John Foss, the former commander of the U.S. Army's  82nd Airborne Division

"If you have a country that's a sliver and you can see three sides of it from a high hotel building, you've got to be careful what you give away and to whom you give it." -- U.S. Secretary of Defense Donald H. Rumsfeld, August 6th, 2002


The 2005 expulsion (euphemistically labeled "Disengagement") from Northern Samaria left the settlement of Homesh
destroyed and ethnically cleansed of Jews. This one-minute video explains its strategic importance to Israel: